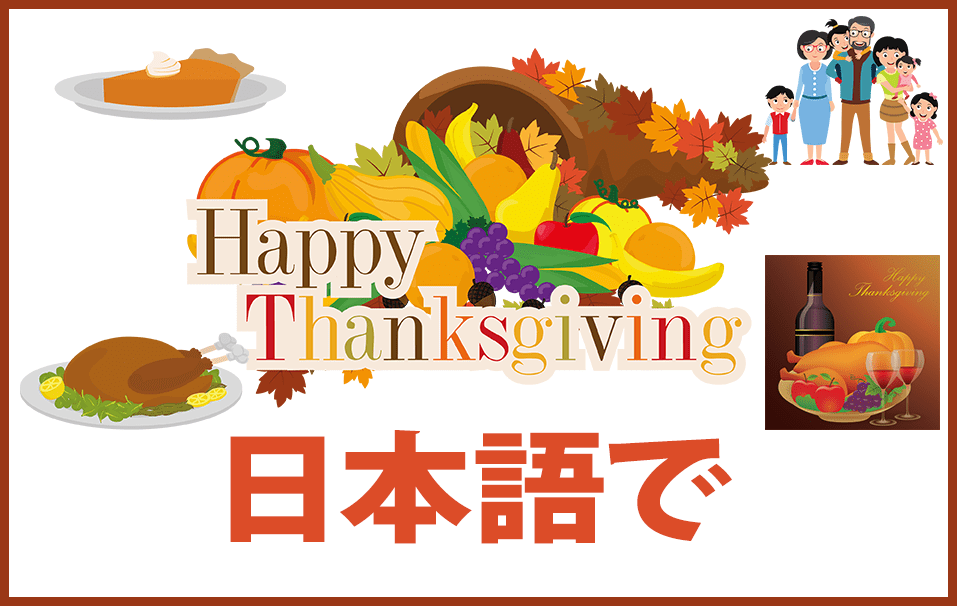 To those in the US, Happy Thanksgiving!

We decided to make a quick video with Thanksgiving related words in Japanese. This is a special video since my son edited it for us–thank you Makoto!
Here are the words in the video, plus a few extra.
Turkey
七面鳥
shichimenchou
[Turkeys aren’t native to Japan. There are a few ideas why turkeys are called 七面鳥 (literally, seven faced bird). One is cooking a turkey is a lot of work and 七面倒 shichimendou means “great trouble” or “difficulty.” Another possible origin is the bird’s face has a variety of colors. Thus it has seven faces. Who knows?]
Pumpkin Pie
パンプキンパイ
panpukin pai
[This is a loan word from English and therefore written in katakana]
Family
家族
kazoku
[家 house + 族 tribe]
Feast
ごちそう
gochisou
[ごちそうする means to treat someone (buy a meal for someone); ごちそうさま is often said after a meal as thanks for the good food.]
Pumpkin
かぼちゃ
kabocha
[From Portuguese “Cambodia abóbora”]

Now, let’s look at Yumi’s words in the video:

こんにちは、みなさん
konnichi wa, minasan
Hello, everyone.
[You can say みんな or みなさん but みんなさん is not considered correct]
パトロンのみなさん、いつもありがとうございます。
patoron no minasan, itsumo arigatou gozaimasu.
As always, thank you so much, Patreon supporters!
[literally: Patreon’s everyone; always; thank you]
[Since the action (the sense of thankfulness) is on-going, we wouldn’t use the past tense ありがとうございました]
Thanksgiving Dayは日本語で、感謝祭といいます。
Thanksgiving Day wa nihongo de, kanshasai to iimasu.
Thanksgiving Day in Japanese is called “kanshasai.”
[While Japan doesn’t have a “Turkey Day,” there is 勤労感謝の日 kinrō kansha no hi Labor Thanksgiving Day. Today it is a day to commemorate labor, production, and general human well-being, but it was based on an ancient harvest festival known as 新嘗祭 niinamesai.]
今日はその感謝祭に関する日本語を勉強していきましょう。
kyou wa sono kanshasai ni kan suru nihongo wo benkyou shite ikimashou.
Today, let’s use Thanksgiving Day to study Japanese.
[Literally: today; this Thanksgiving Day; concerning; Japanese language; study; to deliberately do (していく shows doing something deliberately. The いく as an auxiliary verb means “to continue” with purpose.)]
それでは、あしたは家族で楽しい感謝祭をお過ごしください。
sore dewa, ashita wa kazoku de tanoshii kanshasai o osugoshi kudasai.
Well, then. Tomorrow, please enjoy spending Thanksgiving Day with your family.
食べ過ぎないでね。
tabesugi naide ne.
Don’t eat too much! 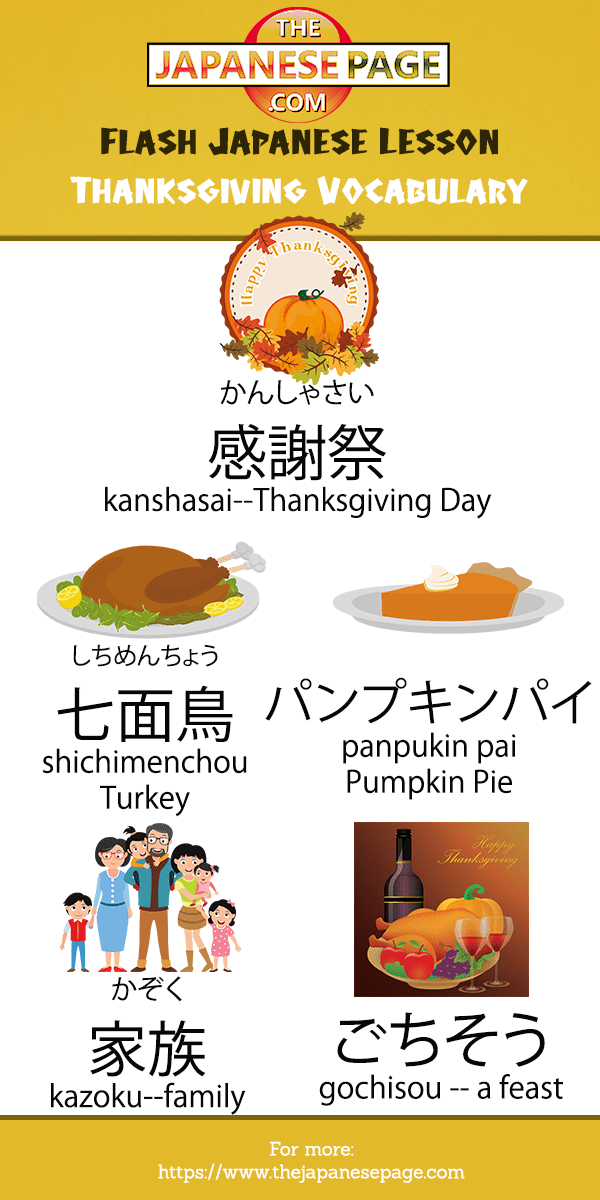 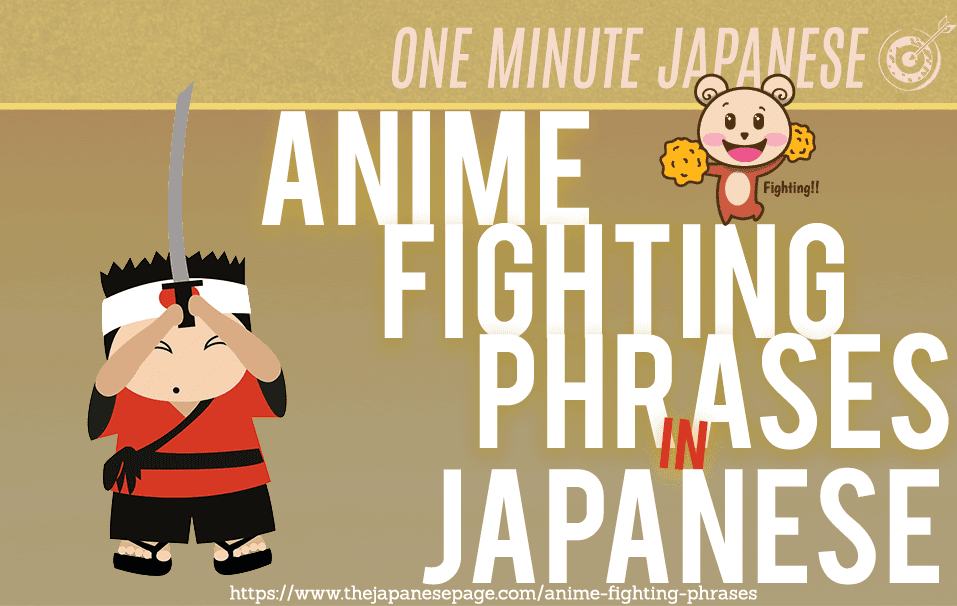 Here are five kakkoii fighting phrases you might hear in anime Japanese or read in manga. Listen for them when you get to the fighting scenes.

Please note, all five of these can be rude–they are, after all, fighting words. Be careful how you use them, but saying them to your close Japanese friends could be fun.

Let’s get started with some Anime Fighting Phrases in Japanese… 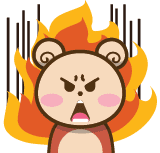 The かかって comes from a word that means “to start,” “to deal with,” “to handle.” こい is a somewhat rude command that means “come on!” 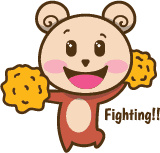 I accept your challenge!

When you are ready to take up the gauntlet, say, 「うけてたつ！」 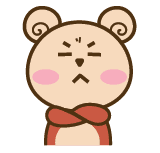 Said when things are not going well for the bad guy and he is about to lose. もん is an ender used for emphasis. もんか is used for creating rhetorical questions when the speaker actually believes the opposite is true. “Am I about to lose? No way!” 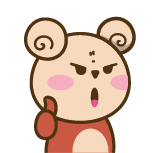 I’ll get you for this!

The bad guy is lost and he knows it. He is in an embarrassing retreat, but to save face, he says to the victorious hero, 「おぼえてろ！」 Literally, this is “I’ll remember this.” It can mean, “You’ll be sorry!” or “You’ll regret this!” or “I’ll get even someday!” 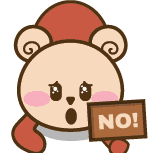 This is also pronounced ちきしょう. Literally, this means “livestock” or “beast.” When said when upset, however, it is a light curse. Dammit! Hang it all! Darn! 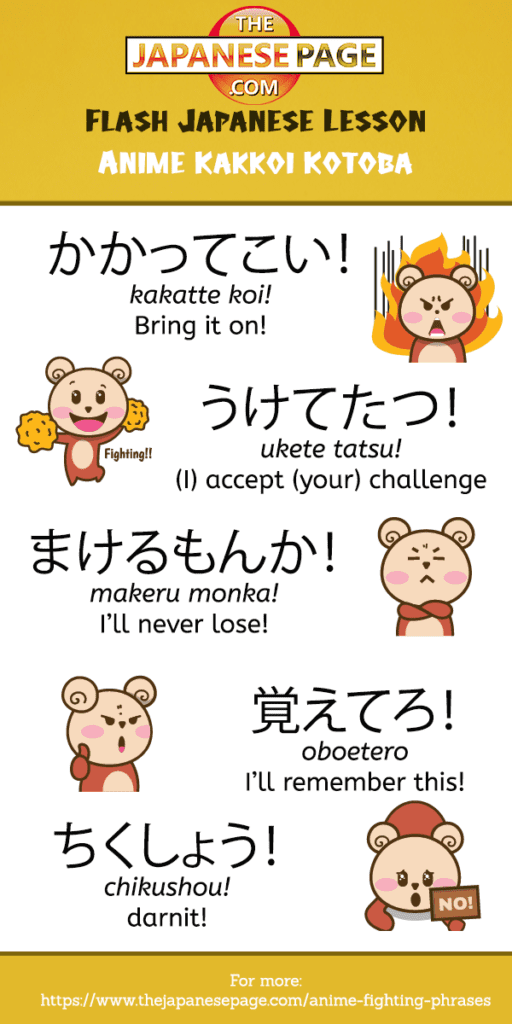 They say the first million dollars is the hardest to get; it’s all downhill from there.

A Japanese reader for intermediates by Richard VanHouten
第三章 狐との出会い Encounter with a Fox
For the MP3, explanation, vocabulary, and subsequent chapters, please see:
https://www.thejapanesepage.com/audio/…
and for the complete series see Rich’s site:
http://www.citlink.net/~richvh/
[youtube=http://www.youtube.com/watch?v=n23XRKSQJI0&hl=en&rel=0&color1=0x006699&color2=0x54abd6]

I found a fantastic Youtuber with the super secret nickname of Kemushichan. Outside of the super secret spy nickname world that is Youtube, Loretta is the name of this amazing 19 year old (according to her Youtube profile). She speaks English, Japanese and Mandarin. I cannot vouch for her Mandarin, but her Japanese is great. Not only that, but her videos are well edited and fun.
She started a series of videos for discussing challenges faced while learning Japanese. (日本語の難しさ nihongo no muzukashisa) I haven’t watched all her videos yet, but I particularly liked this one on multilingualism:
[youtube=http://www.youtube.com/watch?v=yhYdyWoATlY&rel=1] She only has 392 subscribers (I happen to know I was the 392th). Subscribe!

In a blatant attempt to hide my embarrassment over my last post (CIS/CSI–see comments there), I’m posting this to push the previous post into blog oblivion. That, and to say…
Good news!
We are now over 900 (903) today.

Now if that wasn’t enough to distract you from the previous post, here is my dog posing for the camera shortly before we left for a Japan trip a few years back. I think he was looking forward to being the dog of the house for a while: