The story of Clay’s introduction to this traditional Japanese food. Everything (and more) you would ever care to know. 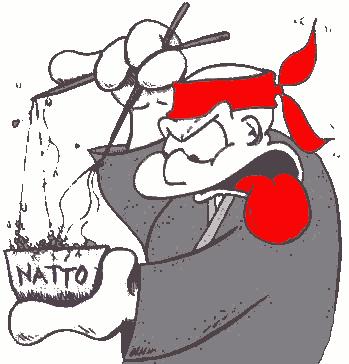 For those of you who have never had the pleasure of living in Japan, you probably have no idea what natto is. Neither did I a few years ago when I first came to Japan. My friend, Hiro, was kind enough to show me around my first week. I had a new apartment in dire need of food supplies. So he took me to the local supermarket. There he proceeded to introduce the various Japanese and foreign foods that I could buy. He showed me umeboshi ( which I LOVE! ), age tofu (which I also LOVE), and one more food that I was told nearly all gaijin (foreigners) HATE. This was my first introduction to natto.

Natto is molded beans. (I could put it more delicately but that’s what it is.) It gets worse. It’s not the description of its make-up that makes this food disturbing. It is its smell. That is the reason most gaijin stay clear of natto. Imagine being locked in the trunk of a car for 24 hours with only a dozen rotten eggs and yesterday’s socks to keep you company. I think you can get the picture…

The problem, back in that long ago summer’s day, was that Hiro failed to mention the above point. ALL he said was most gaijin don’t like it. So naturally, I didn’t want to be like many foreigners who refuse to try to fit into Japanese society. So I said to Hiro, “watashi wa rippana nihonjin ni naritai.” (I want to become a great Japanese!) and bought the natto.

The following day, alone, I went with a hungry stomach to the kitchen to test the sincerity of the previous day’s pledge. Full of confidence, I grabbed the natto with one hand and raised my other hand in a fist vowing, “Henceforth, I shall forevermore be a great Japanese!” Lowering my hand and realizing, shamefully, that I was talking to myself, I proceeded to open the Natto.

So there I was, all by my lonesome, with but a week’s training in the Japanese doings of things. Propelled by my hunger and the will to be a ‘ great Japanese,’ I cracked the Natto open. With but a slit, my nose perceived the presence of a formidable enemy. Surprised, I ran to the nearest trash can and ridded myself of what I thought to be mold ( kabi ) . Which wasn’t too far from the truth. 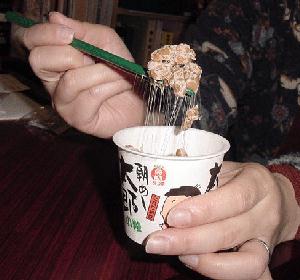 Today, as I write this some eight years after the said event, I have yet to eat this mysterious natto. I have a gaijin friend who claims it to be delicious. I will take his word for it, but I won’t take his natto.

I’d just like to come back on your thing about natto. I’m french and live in NYC. I’ve been quite exposed to Japanese culture, through trips and friends. I only hesitated to eat natto the first time. But the second time, it was at the Mitsuwa supermarket in New Jersey and there was this food demonstrator giving out free samples of natto with rice and nori, dipped with a touch of soy sauce. It was an instant revelation. I bought the natto on the spot and I’ve been eating it on a regular basis since then. I now have a deep passion for the stuff. Obviously slimy and stinky is nothing new for French people, what with their snails, frogs and runny cheeses. So I guess I come to natto with that background, even though I hate to eat snails and frogs.

Also, you don’t mention what most Japanese invariably say about natto: it’s good for you. I don’t really know the exact effects, but I do feel satisfied and fortified after I eat natto and I fancy that maybe the sliminess actually has a cleansing effect in the body, as if all kinds of things could stick to the stuff and be evacuated.

And this: once I had very few things in my fridge and couldn’t go out. So I invented the following recipe: soba with natto and cream cheese. It was divine.

As I’m writing this, I suddenly feel an urge to eat natto…

So there you have it… and you can keep it. Clay