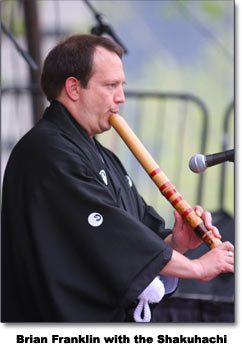 The 尺八 shakuhachi is a Japanese flute often heard at matsuri (festivals); not the sharp, high-pitched one, but the instrument that makes a melodic, middle tone. The Shakuhachi plays the most hauntingly beautiful lullabies.

Along with the stringed instruments 琴 koto and 三味線 shamisen, the shakuhachi is one of the instruments heard in 三曲 sankyoku—the three instrument Japanese chamber music.

It is said if a shakuhachi player plays a perfect note, the music would bring peace to all. 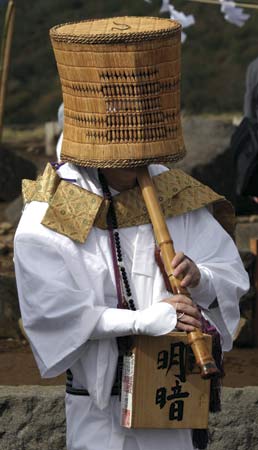 The Komuso (see photo at below right) are mendicant priests that roam around serving others by receiving their troubles, worries, and grief upon themselves. After playing they might receive in their rice bowls money, rice, or simply the troubles of the people they played for. Easy to spot, the Komuso wear large reed baskets over their heads to keep themselves anonymous.

The shakuhachi of today is a piece of bamboo hollowed out with four holes on the front and one hole in the back. In the hands of a master it can play chromatically (12 notes) for three and a half octaves.

Today, the shakuhachi can be heard during suspenseful scenes in movies such as The Last Samurai or television programs. The instrument produces a sound perfect for a good chase on a steep hillside with barely a ledge.

It is played superbly by jazz players because of its expressiveness and responsiveness. John Coltrane and Kenny Loggins have been known to play this wonderful instrument.

The current form of the shakuhachi has been around about four hundred years. It has weathered physical changes, being banned by the government, and survived war (Sino-Japanese War and WWII). It continues to stand the test of time.