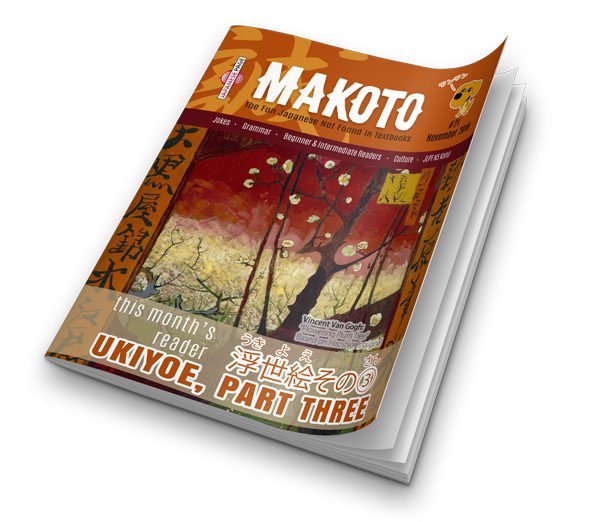 Thank you so much
for your purchase!

This month, we will wrap up our three-part series on ukiyoe, Japan’s biggest contribution to world art. The cover of this issue isn’t a Japanese artist, but if you read last month’s reader, you’ll know that Vincent van Gogh was a huge ukiyoe fan. He did two copies of prints by Hiroshige. Here is the original (left) with his copy to the right: 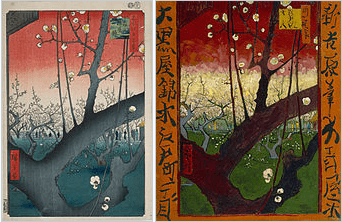 Notice something different? Van Gogh made it even more Japanese by adding kanji to the borders. Learn more by working through this issue’s reader.

If you do or if you have suggestions for improvement, please let us know: help@thejapanshop.com

Was there a warm one?

の no—one (の is used in place of a noun; perhaps there is a warm towel or a warm drink)

uō saō
Running around in circles; like a chicken with its head cut off; moving about in confusion; going every which way

A sudden earthquake caused the people to go
in all directions. 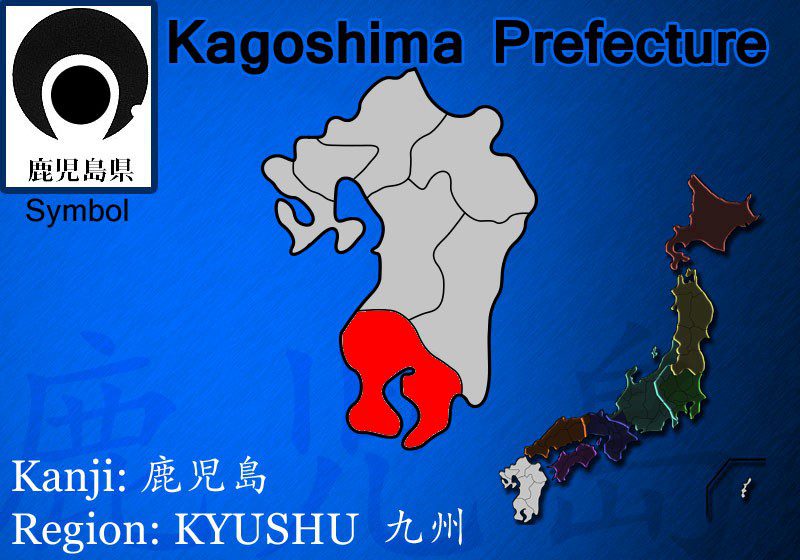 Spanning some 600 kilometers from north to south, Kagoshima is the southernmost prefecture of the southernmost main island (not including Okinawa). Japan is made up of four main islands in addition to thousands of smaller ones. This region is called 九州 kyuushuu. In the old days, Kagoshima was a part of the Satsuma province that played a major role in the Meiji Restoration.

· The Flower Park Kagoshima—the largest flower garden in Japan with 400,000 flowers and trees of 2,400 different species.

· Saigo Takamori—an influential samurai whose life (loosely) inspired the 2003 movie, The Last Samurai, was born and died in Kagoshima.

A book from the Heian period has “nekoma” for “cat.” As time passed, the “ma” was dropped and it became “neko.”

Another possible origin is that during that time, the cat’s cry was represented as “neu neu.” So, the “naku ko”, that is, the creature who cries “neu neu” came to be called “neko.” Even today, the cat who cries “nya– nya-” is called “nyanko.”

Phrase of the Day

ちょっと is one of the most versatile words in the Japanese language. It can mean “a little” “just a minute” “somewhat” “fairly…” “hey!” or with a negative verb, it can mean “not easily done” (or really, “impossible!”).

ちょっとよろしいですか？
chotto yoroshii desu ka?
(Do you) have a moment?

ちょっとすみませんが。
chotto sumimasen ga.
Excuse me. Sorry to bother you, but…

ちょっとできませんが。
chotto dekimasen ga.
I can’t really do it.
[Japanese tend to not be direct. The ちょっと softens the let down.]

ちょっと！ちゃんとしてよ！
chotto! chanto shite yo.
Hey! Get it right!
[ちゃんとしてよ means something like “You are sloppy. Get your act together and do it properly.”]

Basho is undoubtedly the most famous of the classical haiku poets. While on a long journey from Edo in the spring of 1689, Basho wrote his most famous collection of poems called, Oku no Hosomichi.

Haiku is famous for the bimyou subtle hints. The kigo (hatsuyuki - first snowfall) tells us it is winter (without saying so explicitly). And the まで at the end implies the extent to which the snow fell. If the first snowfall was large, the delicate daffodil plant would be crushed. But no. It slightly bends. Therefore, without explicitly saying it, we know the snowfall was light.

Learning Kanji on Character at a Time

There are many, many kanji that have the kanji part 大 (big). Here are a few of the most common.

Look at the character and try to come up with a mnemonic to remember it or use our suggestion (not a historical analysis). The weirder the mnemonic, the better.

Continuing our look at asking negative questions for politeness, let’s try using くださいませんか. It is a polite way to ask someone to give you something.

■ Use as you would with ください. After nouns and after the て form of verbs.

のをしてくださいませんか？
Won't you correct my Japanese for me?
[my | Japanese language | (direct object) | fix | won't you please?]

そのスーツケースをくださいませんか？
Won't you give me that suitcase?
[that | suitcase | (direct object) | won't you please?]

Do you have any questions about the Japanese covered in this issue? Find any errors? Please contact us by clicking here.