Each month, enjoy a new story in English -- Tales from Old Japan.

We thought it might be fun to read a story or essay on some aspect of Japanese folklore, history, or culture. We will start off by going through (once or twice a month) the 17 stories in Lafcadio Hearn's famous collection of scary stories and folktales, Kwaidan.

These stories, while written by a foreigner (Hearn) writing to the English-speaking world, have had an immeasurable impact on the Japanese imagination. In fact, some of the regional tales he recorded have gone on to become the most well-known 昔話 (mukashi banashi - folktales) in Japan. In other words, there is a very good chance the vast majority of Japanese would have never heard of stories like Yuki Onna had it not been for Lafcadio Hearn.

I (Clay) will read each story in the original English. If you are an intermediate or above, you may want to work through the stories in Japanese. (The original book was written in English, but, of course, it was translated into Japanese.) I will add links to the appropriate Aozora page.*

Still, whether you are a beginner or ex-beginner, we hope you will enjoy these English recordings of his stories. After all, part of learning a language is learning about the culture.

* Aozora Bunko is the Gutenberg Project of Japan. It has a wealth of public domain texts for intermediates and above to enjoy. 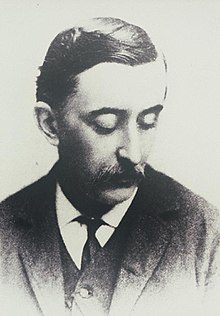 Lafcadio Hearn was born in Greece in 1850 but eventually ended up in Ireland. At age 19, he got on a boat and took a job as a newspaper reporter in Cincinnati, Ohio. Later, he moved to New Orleans where he lived for a decade working as a writer. He is still remembered today in New Orleans for his writings about the city, voodoo, Creole recipes, and other matters of local interest.

But we wouldn't be talking about Lafcadio Hearn had he made the Big Easy his permanent home.

In 1890, Hearn moved to Japan as a newspaper correspondent. The job didn't work out, but the exotic locale did. He made Japan his home, became an English teacher, and married a Japanese lady (of samurai lineage, no less) named Koizumi Setsu. He took his wife's family name and became Koizumi Yakumo (which is the name most Japanese know him by).

The title is transliterated as "Kwaidan." Yumi thinks Hearn's wife's dialect added a "wa" sound after certain sounds, but it seems most Japanese pronounce the book as "kaidan" which is the modern, standard pronunciation of 怪談. One neat side-effect of adding the "W" sound, however, is it sounds similar to "kowai" (scary). Since 怪談 kaidan means "ghost stories" or "horror stories", I'll go with that.

As mentioned above, Hearn's writings have made previously obscure and highly regional tales well-known throughout Japan. It appears he was the first to record Yuki Onna (the Snow Woman) which is now one of the most famous mukashi banashi stories in Japan.

Each month, we will post a new recording of a story which you can either download or listen online.

We will begin with "The Story of Mimi-Nashi Houichi" which means "Houichi without ears." Just why he is without ears -- well -- you'll have to listen to find out...

[Click here for the Aozora link to Japanese text]