Cars in Japan have license plates. 🙂 In Japanese they are called namba- pure-to . 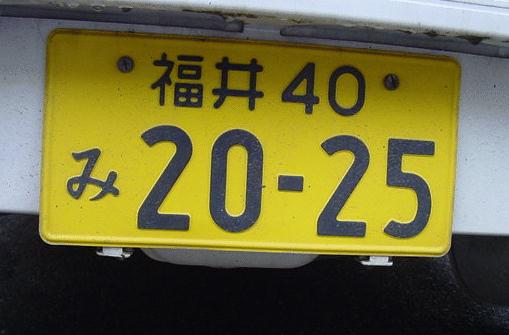 The top left has a screw.  Next to the screw is the ken (prefecture)’s name. In this case 福井 fukui .  According to Dean, a surfer kind enough to drop me a note, the numbers to the right may be the class of vehicle, small car, big car, taxi, truck, etc. for example, in Osaka Taxi is 500. After the 2nd screw the bottom left has a hiragana, in this case み .  This along with the numbers to the right are the car’s number.