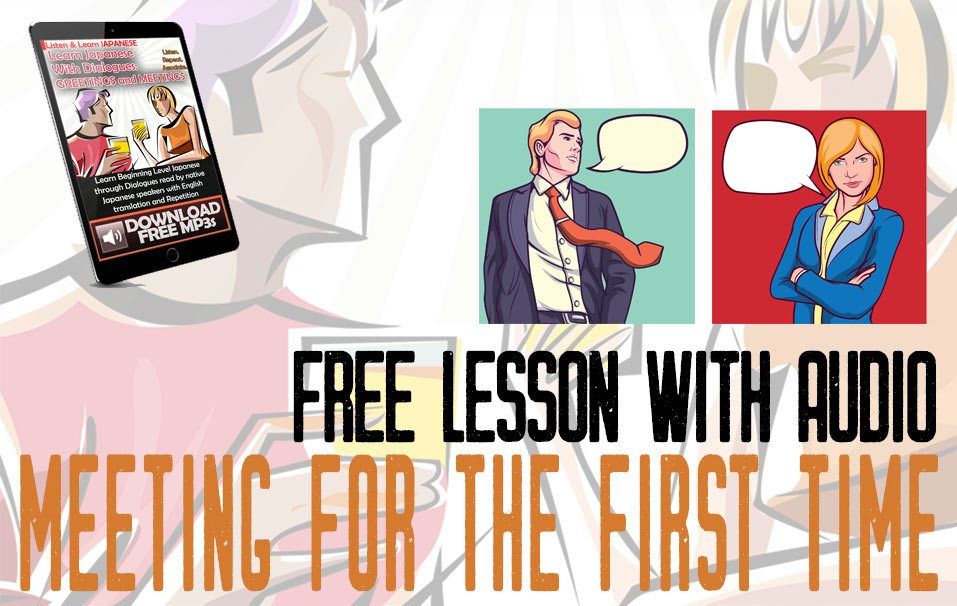 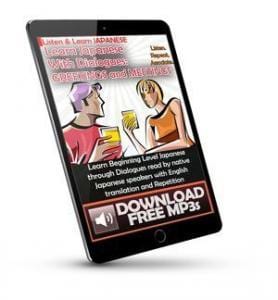 DIALOGUE ONE: Meeting for the First Time

In this article, we will examine a dialogue between two people who are meeting for the first time. Listen to the dialogue while going through the text, spend some time going through the grammar notes, and then listen to it once more–this time, hopefully, with greater comprehension.

If you like this lesson, check out our Learn Japanese through Dialogues series of eBooks (or paperback) + MP3s. This particular dialogue is from the book “Meetings and Greetings” as seen to the left. See the bottom for a special discount to get four of these eBooks, each with eight or more dialogues, for the price of one eBook.

Dialogue One: in Japanese Meeting for the First Time

はじめまして。マイクと申します。
hajimemashite. Maiku to moushimasu.
How do you do? I am Mike.

Hajimemashite is the most common greeting when meeting people for the first time.; “to moushimasu” is a polite (humble) way to introduce one’s name.

Another way to say your name is simply “(name) desu.” You may notice your name doesn’t fit well into Japanese. For example, “Smith” becomes “sumisu” because the sounds in Japanese don’t allow for the “sm” combination and the “th” sound isn’t found in Japanese. Ask a Japanese friend or a Japanese forum online how your name would be written in the Japanese sound system.

“Douzo yoroshiku onegaishimasu” is commonly used after “hajimemashite.” It means something like, “please treat me well.”

doko = where; kara = from; doko kara = from where — kimashita is one of the few irregular verbs in Japanese. kuru (plain form) = kimasu (masu form) both mean “to come,” but the masu form is more polite.

In Japanese, you can often drop information that was previously introduced or is expected. So instead of saying, “I am from America” or “it is America,” you can simply say, “is America.”

アメリカのどこですか？
amerika no doko desu ka?
Where in America?

In a simple way, you can think of “no” as an apostrophe S: amerika no doko = America’s where = Where in America?

shuu means “state” and is used with the fifty US states. Japan has prefectures known as ken.

deshou implies the speaker is expecting an affirmative answer. It is a very useful sentence tag for when you aren’t sure of your statement or don’t want to hurt the sensibilities of the listener.

はい、暑いです。由美さんの出身はどこですか？
hai, atsui desu. yumi-san no shusshin wa doko desu ka?
Yes, it is hot. Where are you from?

shusshin = place of one’s origin (usually hometown as in this example). The ” ha” here is the topic particle and is pronounced “wa.” This is one of the very, very few irregularities in  Japanese pronunciation.

Literally, “Tokyo is” (It is Tokyo). As mentioned earlier, if information is obvious or has been previously introduced, it is very often dropped.

“sou desu ka” here means “Is that so?” but it is a very versatile phrase with many meanings depending on context and how it is said.

sayounara isn’t used as much as you may think. It is often used when saying goodbye to someone for a long period of time.

Listen to the dialogue again. This time with repetition. 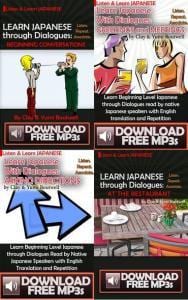 Did you enjoy this lesson? This is the first dialogue from the Greetings and Meetings eBook. Get that eBook plus Beginning Conversations, at the Restaurant, and Asking Directions for only $5. 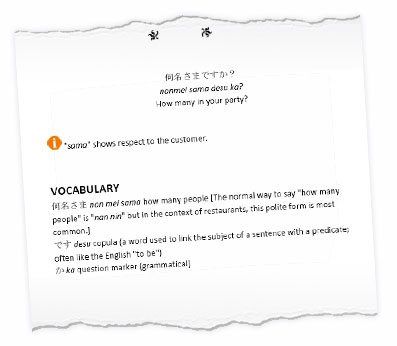 Get all four Japanese Dialogues study packs for one low price. Separately, these four eBooks (also includes MP3s as well as Kindle, ePub, and PDF versions) would cost $17.96 at Amazon. Click here to lock in this limited time offer now.